Yup, me.  Queen of cupcakes and cocktails.  Eater of mac and cheese, BLTs and Reese’s PB Cup Oreos (seriously, find them).  I’m not sure what possessed me, the day before the 4th of July, to decide that I needed to do a 3 day detox.  Perhaps I was inspired by the shiny new Whole Foods that just opened about a mile away from my house.  Perhaps it was those jeans I was wearing that were a little too tight around the middle.  Regardless, I decided to use my three day weekend to declare my independence from chewing.

That Thursday I Googled “3 Day Detox” and found Dr. Oz.  He kindly provided me with a printable sheet containing all the information I would need to starve myself over the holiday weekend.   It looks like this:

It seemed pretty simple, and none of the ingredients were too scary, so I printed it out and went to the store.  Their little international produce stand was so cute!  How could I not spend all my money there?! 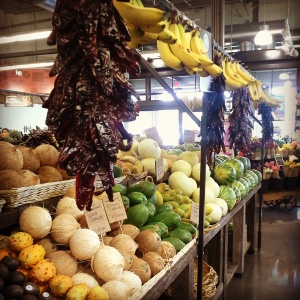 The site says you can do this detox for $16 a day.  Now, I figured if I was “detoxing” it would be best to buy all organic produce, right?  Pesticides and detox are kind of mutually exclusive.  I don’t know if Oz factored this in to his price estimate, or maybe he assumed that I would already have the required probiotics (no) and multi-vitamins (yes, but they were very expired) but I ended up spending $144 for two people (I somehow conned my boyfriend into doing this with me).  So that works out to $24 a day.

I wasn’t worried about the price though because according to the reviews I was going to be super energized, have glowing skin and finally shake this congestion that has been bugging me – all after 3 days!  Well worth it, right?

Day 1, July 4th – The day started off well enough.  The breakfast shake was okay, and it filled me up.  For like, an hour.  By the time lunch rolled around I was starving.  The lunch shake didn’t taste bad, but had the consistency of applesauce.  It took me an hour to finish it, and then an hour later I was hungry again.  The snack shake is just a repeat of the breakfast, lunch or dinner shake.  I was already tired of smoothies.  It didn’t help that any time I stepped outside I could smell the burgers and hot dogs grilling all around the neighborhood because that’s what you do on the 4th of July, right? You BBQ.   You don’t go on a flipping juice cleanse.  Idiot.

I also discovered a serious flaw in the detox plan on this day.  I was so exhausted from hunger that I didn’t have the energy to clean up after myself.  I was quickly running out of the blenders…

The dinner shake had kale in it and was completely vile.  The kale was kind of masked by the other ingredients in the lunch shake but not so for the dinner one.  Ew. Yuck. Gross.  I didn’t finish it and went to bed so hungry that I was afraid I might gnaw off my arm in my sleep. 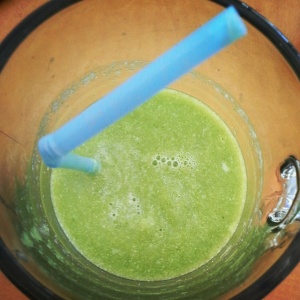 Day 2, July 5th – I wasn’t terribly hungry when I woke up, and after taking inventory of my appendages I headed to the kitchen to heat up my detox tea.  It’s just green tea with lemon.  Probably the only thing I didn’t get tired of during the detox.

Aside from being slightly less starving than I was on Day 1, the only difference was the dinner shake.  I took the kale that I had prepped ahead of time and tossed it out back for the bunnies in our yard to eat and I added baby spinach to the shake instead.  It was only slightly less gross.  I am not sure why the damn thing just refused to taste good. How can blueberries and mangoes create such a disgusting sludge? Maybe my avocado was bad or something?  I don’t know.

There was also continued grilling by my rotten neighbors, and an Instagram feed full of potato salad and s’mores.  Seriously, don’t detox over a food-centric holiday weekend unless you are some kind of masochist.

Day 3, July 6th – I was surprisingly NOT hungry for most of the day.  I think my body finally realized I wasn’t going to give it a donut and gave up on the whole starving thing.  Plus, I am sure the fact that I was already completely tired of drinking these stupid shakes had something to do with it.  None of them were good enough that I would WANT to consume them every day.

I decided to make a big fritatta so I would have something relatively healthy to have for breakfast during the week ahead.  I thought it would be a good idea to caramelize onions to put in the fritatta.  It wasn’t.  They smelled SO GOOD that I almost stuck my face in the skillet, and my boyfriend came in from mowing the lawn and excitedly asked if we were having steak for dinner.  I’m not sure which one of us was more depressed when I got the dinner shake baggie out of the fridge.  However, I am proud to say that we both toughed it out and completed the 3 days.

I never felt horrible during the detox (aside from the whole my-stomach-is-a-black-hole-about-to-implode-upon-itself thing) but I felt hungover the day after.  Maybe that was a sign it was working?  I also felt completely exhausted.  Why was I not bright-eyed and bushy-tailed?!  I did feel slightly more mentally alert I guess, but nothing like the drastic results I had been reading about.  My skin looked the same, my nose was still stuffy.  I did lose 5 pounds, but I will probably gain it all back just by looking at a bowl of pasta.  Don’t get me wrong,  I am sure it was good for my insides and I am glad that I did it, but I was a little disappointed by lack of noticeable results.  Maybe I am just too toxic to benefit from a mere 3 days of detox. Have you looked at my other blog posts? 😉

Or perhaps I shouldn’t have been expecting the same results as discussed in the reviews by all the lovely women who already eat organic all the time and do yoga and make their own laundry detergent.  I am definitely no fitness nut.  I need to lose some weight.  I like to eat things that are not good for me.  I enjoy booze.  That is why I decided to share my detox experience on my blog about cupcakes and cocktails.  I thought I wouldn’t make it past lunch on the first day but I did it!  I don’t think I would do it again…but I did it!  So if you think you might want to give something like this a try I say go for it!  If I can do it, anyone can!  And if you end up glowing, more power to you!

Oh, and by the way,  the kale is STILL in my backyard.  Even rabbits think that stuff sucks.

Have you ever done a cleanse? What was it like for you?